Hive Technology, a technology innovation and consulting business unveiled its innovative new “Hive One ID” technology at the Arab Future Cities Summit being held at Sofitel, Dubai, The Palm Resort and Spa on November 2nd and 3rd, 2015. 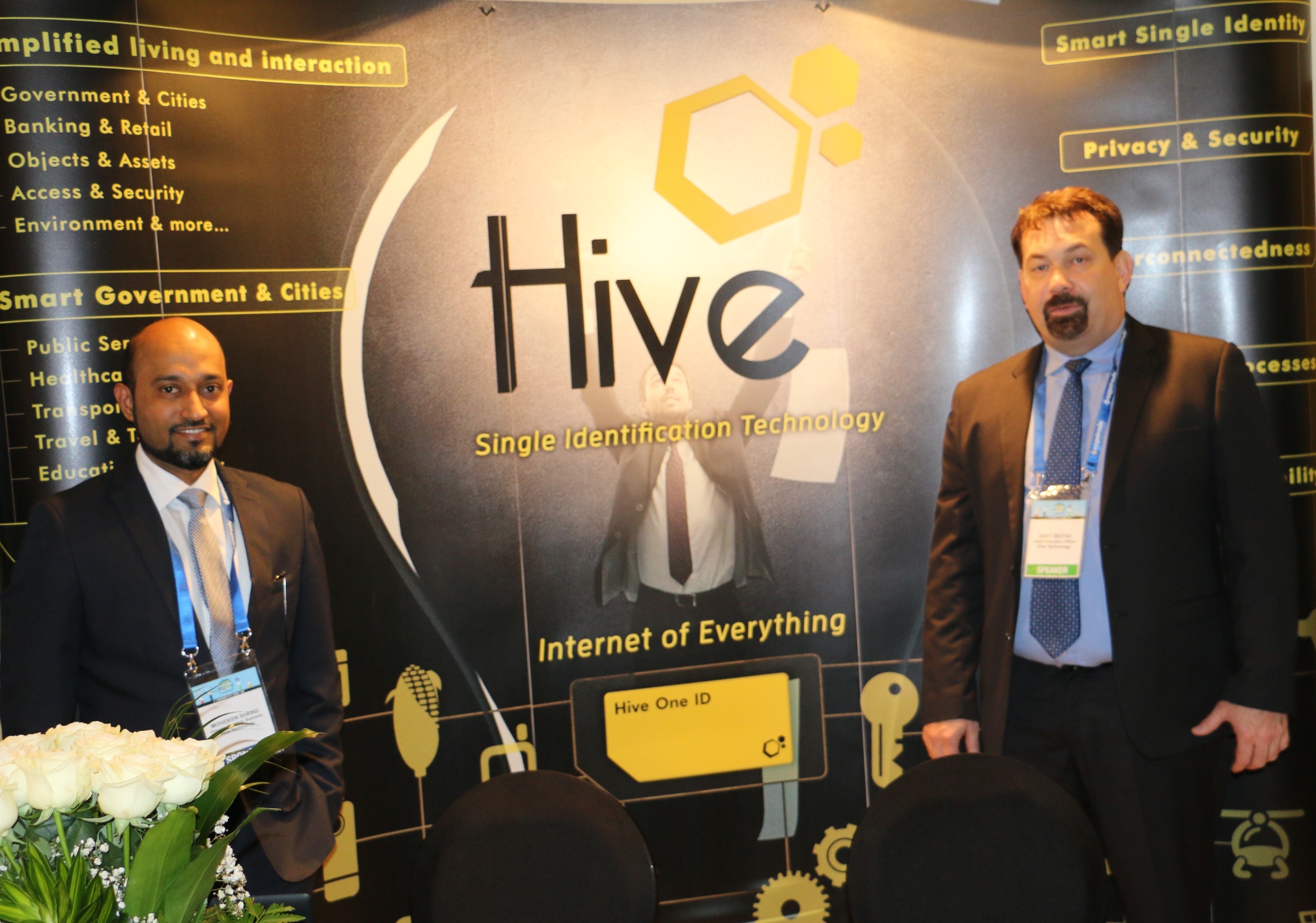 Speaking on the Summit’s opening day, Hive Technology’s CEO Gert Botha laid out a compelling case for single identification technologies creating a world in which service delivery is always SMART (specific, measurable, attainable, realistic and timely). Botha revealed “Hive One ID”, the world’s only wireless identification and monitoring technology that can identify people and objects across functional and organizational boundaries.

“At present, our reality is negotiated through various identification methods used for different purposes, from driver’s licenses and passports to loyalty cards. These result in clutter, complexity, and compromised security as identity theft becomes a widening concern. The Hive One ID has been specifically developed for the Internet of Things, with the aim of giving anyone – and anything – a unique and secure identifier. This delivers the benefits of security, simplicity and efficiency, and will help revolutionize how we interact with objects and other technologies in the real and virtual world,” Botha said.

Existing methods of identification face a number of issues when confronted with a new inter-connected reality. First, consumers are being asked to carry a plethora of cards and identifiers – each used for different things. These identification methods have no way of communicating with each other, or forming a unified profile that is safe and easy to use. Crucially, different identification technologies provide varying levels of security – a key concern because privacy invasion and identity theft usually starts by targeting the weakest link in the chain.

“We believe that a single identity should be suitable to be used in all aspects of daily life, and that it should not be able to be copied or replicated. That is why Hive One ID’s generate a totally unique digital identity that cannot even be recreated by the inventor. The data on the Hive One ID is uniquely encrypted by the owner of the ID and only decrypted once updated in secure database. Moreover, the technology is designed to not keep unnecessary data on the Hive One ID but rather in a secure database from where the data will be provided once authorized by the owner. You can think of it as the creation of a digital signature that is authenticated and unique to the person or object,” added Botha.

Hive One ID has been engineered for a world heading towards the “Internet of Things” where governments, businesses, people and objects communicate seamlessly. Every object and person participating in this Internet requires a unique unbreakable identifier. The Hive One ID fulfills this need in a completely secure, encrypted manner, creating a unified identity that can be used anytime, anywhere.

For instance, Hive One ID can improve and streamline government services reducing CAPEX and OPEX costs. Hive One ID demonstrates the capability to eliminate the bottlenecks that government organizations encounter with the integration of services in SMART initiatives. At the same time, the technology is suitable for the private sector as it offers a progressive and scalable approach to use a single technology across multiple applications. Not only can manufacturers embed the technology as an OEM but also independent solution providers can utilize it for SMART initiatives.

“For government and businesses, the ‘Hive One ID’ technology can streamline service delivery while reducing operating costs. It is very helpful for processes like national identification, vehicle registration, accessing offices and verifying secure payments. It also enables SMART service delivery, which is becoming a priority for governments across the GCC,” said Mohideen Shaikh, Director- Strategic Business, Hive Technology.

“At the same time, ‘Hive One ID’ technology can be easily imbedded within existing infrastructure and solutions. It can be incorporated into cell phones, turning the phone into a ‘Hive One ID’ device. The technology can also verify identities without an Internet connection, and delivers cost, verification and security benefits to businesses, governments and the public at large,” added Shaikh.

Data form One ID can be stored in a cloud –based database which the owner of the One ID will own all of its associated data which is always secure and private. The data is available online through the Hive Portal where the user chooses how to make the data available and to identify who can see this data. The ID can then be read anywhere in the world by a Hive Reader, offering an easy form of identification that is impossible to steal, compromise or duplicate. Hive One ID technology gives the user the authority to control who can see his data, when and for what purpose. Each One ID is uniquely encrypted to secure the data. It can only be decrypted by the owner using a unique user key.

“With Hive One ID, we have designed and developed an innovative technology that will positively impact governments, industries and people. We strongly believe that ‘Hive One ID’ will be the thread that simplifies and secures our world every step on the way, and that it is the missing link in the Internet of Everything technological revolution that is rapidly gathering momentum,” continued Botha.

“For the general public, the advantage lies in simplicity, efficiency, security and complete control. Not only can the ‘Hive One ID’ not be replicated or stolen but it also gives users complete discretion on when and how to reveal details. People can use the ‘Hive One ID’ for everything – starting their car, paying for parking, or boarding the metro. It can be used to shop, travel and access banking services. The days of bulky wallets might soon be over,” Botha concluded.

About Hive Technology: Hive Technology is a technology innovation & consulting business, with offices in the GCC with regional offices located in Ireland and South Africa. The development that underpins the Hive products started 35 years ago with the inventor's vision of what we call the "Internet of Things" today. Hive Technology’s products are the fifth generation products based on various inventions over the last 35 years including several of the world's first inventions developed by the South African inventor Terry Ashwin who has been designing products in this domain since 1978.

Hive Technology’s main objective is to develop a totally secure wireless technology that enables single identification across various aspects of governments’, businesses’ and people’s lives and used applications. Hive Technology has taken this business direction as the world gradually enters the era of connectivity where single identification, privacy, control and protection of assets is expected to be major concern among populations. The company designed and developed an innovative technology that will positively impact governments, industries and people, and called it ‘Hive One ID’. The company believes that ‘Hive One ID’ will be the thread that simplifies and secures our world and that this technology is a key component of the future. ‘Hive One ID’ is the missing link in the Internet of Everything technological revolution that is rapidly gathering momentum.